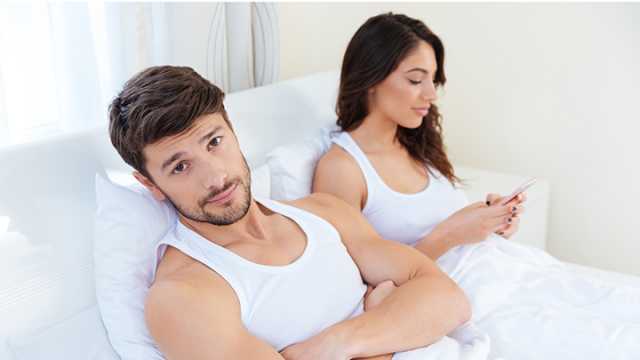 If you’re like millions of other Americans, you have a love affair with your smartphone. It’s the first thing you see when you open your eyes in the morning and the last thing you glimpse before going to sleep. Life without your smartphone seems impossible to imagine.

But if you care about your husband or wife, it might be time to end that other, technological love affair. Well, at least restrict that affair to daytime hours, leaving the darker hours to just you and your spouse.

Why? Because not only is the bright screen of your phone doing you damage, it’s potentially negatively impacting your partner as well. Similar to second-hand smoking, you might be leading your spouse to an early grave without even realizing it.

A study published last year in the Journal of Social Science and Medicine asked 844 Flemish adults between the ages of 18 and 94 to participate in a survey around electronic media and sleep habits. Aside from the rather surprising finding that only half of respondents owned a smartphone (perhaps reflecting a slightly older demographic in the survey), 60 percent of participants took their phone with them to the bedroom. These people experienced longer sleep latency, worse sleep efficiency, more sleep disturbance and more daytime dysfunction. All because they took their phone to bed.

Not only that, the study showed that the more frequently participants used their phones before bed, the worse their sleep was and the more fatigued they were the next day.

So whats with all these negative consequences of using your phone at bedtime? Let’s find out.

Blue light is the enemy at night

Everyone knows that humans are diurnal creatures. We’re at our most active and alert under the sun, while our bodies automatically begin to slow down with the setting of the sun. We recognize that we need darkness to sleep best, and we need light to keep us awake. Simple enough, right?

Considering this concept is so simple, why do we insist on exposing ourselves to artificial light after the sun goes down? Few of us realize that the light-emitting devices around us, in particular our beloved smartphone, are tricking our brains into thinking that the sun is still up. Aside from a light afternoon nap, would you really expect to fall immediately into a deep slumber after looking directly at the sun for hours at a time?

Devices like our smartphones emit blue light, a wavelength also radiated by the sun that triggers receptors in our eyes and skin. When those receptors are activated, they tell our brain that it’s still daytime, and to hold off on winding down for the evening. The brain does this by blocking the release of melatonin, which our bodies need to enter into that all-important deep sleep. No melatonin means difficulty getting to sleep and staying asleep.

So while exposing yourself to blue light during the day is definitely a good thing, doing so at night, and especially before bed, is harming your health. Not only that, it’s also exposing your bedtime partner to that light, which in turn negatively impacts their own health and sleep. Switch the phone off at least a couple of hours before bed and you’ll reap the rewards.

The negative effects of smartphones at night don’t just stop at light emission. Smartphones offer a window into the world at large, presenting social media, communications, internet and games all on a very handy little screen. While this is amazingly convenient in terms of staying connected with the world, you don’t necessarily want to be bringing that world into your bedroom.

For example, as you scroll through your Facebook feed while lying in bed, your brain is tricked into thinking that you’re interacting socially. This is generally something that’s done during the day, during the height of activity, meaning the synapses which should, in fact, be switching off the for the night are still firing hard and fast. It’s even worse with smartphone games, which heighten your alertness and prevent the brain from winding down towards sleep. It’s the equivalent of playing a game of soccer and a game of Trivial Pursuit at the same time, then planking down on the bed and expecting to go straight to sleep.

Winding down at bedtime with something like a good book instead, or even just chatting or engaging in intimate relations with your spouse, is a far better way to ease your way into a restful slumber.

My personal experience with smartphones

Three years ago, I suffered from that same smartphone love affair that afflicts so many other millions of Americans. Both my partner and I would take our phones to bed with us, and spend the half hour before “lights out” scrolling through Facebook feeds, playing games, writing emails or occasionally reading e-books. We saw this as our downtime, not recognizing how much it was stimulating our brains and the extent to which that blue light was throwing off our circadian rhythm.

After the lights went out, I’d lie there for hours at a time, simply waiting for that elusive Sandman to descend from the heavens and sprinkle his mystical sleep dust on me. After half an hour, frustration would set in. Then another 30 minutes would pass and I would experience a sort of bleak hopelessness. The more stressed I got, the less I could sleep. And this continued every single night, until I made the connection that it was my phone that was doing the damage.

After banning our phones from the bed, our lives infinitely improved. Rather than ignoring each other in favor of our phones, my partner and I would chat about life, make jokes… or simply engage in intimate relations. It’s fair to say that our sex life improved rather dramatically after ditching the smartphones, and after a solid round of wrestling between the sheets I was asleep in less than five minutes. It seems so obvious now, but it wasn’t so apparent three years ago.

Easy steps to ensuring you and your partner sleep better

The obvious solution for ensuring you and your partner sleep better at night is to simply ban your smartphones and other light-emitting devices from the bedroom. In addition, avoiding the TV, laptop and anything with a back-lit screen will allow your brain to begin releasing sleep-promoting melatonin that much sooner.

But because many people will struggle to end that bedtime love affair with their smartphone, here are a few more simple solutions: