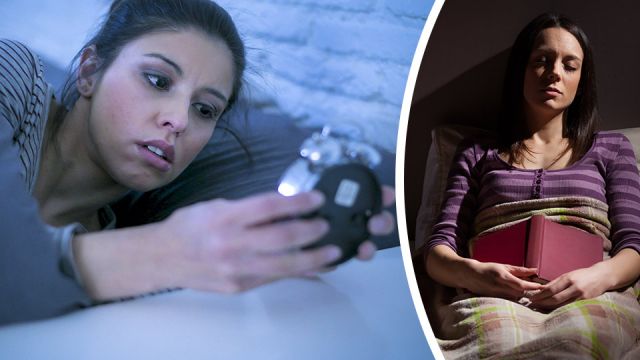 It’s not abnormal to wake up throughout the night — we all do. In fact, it’s programmed into our DNA. Apparently, cavemen often woke throughout the night to make sure predators weren’t prowling around. But the key is to return to sleep, not lay there wide-eyed until dawn. If you’re waking up in the middle of the night and it’s routinely disrupting your sleep, here are five possible reasons why.

Like clockwork, you wake up each night at the same time with a need to urinate. While that is certainly normal, waking up frequently throughout the night can disrupt your sleep. Also, known as nocturia, or frequent nighttime urination, it’s generally defined as a need to get up and pee at least once or twice a night. And the reason may be as simple as drinking too much water before bed or normal aging. But you could also have an underlying condition that warrants a trip to the doctor.

One possible condition may be sleep apnea. Nocturia is so widespread among sleep apnea patients that it’s become a screening tool for sleep apnea, according to sleepapnea.org. Sleep apnea is a common condition that occurs when the upper airway becomes blocked repeatedly during sleep, reducing or completely stopping airflow. But the good news is that many people who suffer from frequent nighttime urination due to their untreated sleep apnea find that it totally resolves once they are treated with breathing devices such as continuous positive air pressure (CPAP) machines.

If you don’t have sleep apnea, here are some remedies for nocturia to try:

If you need more direction on how to manage nocturia naturally, check out this article for more ideas.

2. Your bedroom may be too hot or too cold

However, beyond staying up late and then sleeping in, your circadian rhythm can also be disrupted by waking repeatedly throughout the night. And that could mean your sleep environment is either too hot or too cold. In fact, according to a Japanese study, the thermal environment of your bedroom is one of the most important factors affecting your sleep.

The effect the temperature of your room has on sleep stages is strongly linked to thermoregulation, which in turn impacts the mechanism regulating sleep. Sleep stage can also differ depending on bedding and clothing. For instance, if you sleep in the nude, you may be more affected by cold than heat. But for those who sleep clothed and under a warm comforter, feeling too hot increases wakefulness and decreases slow wave sleep and rapid eye movement sleep. As a result, you’ll find yourself waking throughout the night. For optimal sleep, keep your room temperature between 60 and 67 degrees Fahrenheit.

3. Maybe your smartphone is the problem

If you’re in the habit (like so many of us are) of using your smartphone or iPad prior to bedtime, then you could be disrupting your quality of sleep, suggests a study from the University of California. During the smartphone sleep study, researchers monitored 653 participants for three months. Screen time, specifically prior to bed, was analyzed. Not surprisingly, exposure to smartphone screens prior to bed negatively impacted the quality of sleep. Researchers found that smartphone use around bedtime was linked to longer time falling asleep and experiencing poor sleep quality during the night. While using your smartphone before bedtime may seem like a relaxing idea, you’re better off reading a book.

4. It could be that nightcap before bed

A nightcap before bed seems slightly old-fashioned, yet some people believe it may be the answer to better sleep. Well, not so fast. According to research published in the journal Alcoholism Clinical & Experimental Research, alcohol before bed actually disrupts a restful night’s sleep. The popular theory is, if you drink enough alcohol it will help you sleep because of its sedative effect. And that may be true, that is, until you’ve metabolized that alcohol. After that, it actually prevents healthy sleep-induced rapid eye movement (REM), which is required for restful sleep. The lack of REM sleep then makes the second half of your night restless and disturbed.

5. Maybe you’re just too stressed out

Stress is an inevitable part of the human experience. But the key to handling stress is how you choose to manage it. When managed poorly it can disturb your sleep, waking you throughout the night. A study published in the Journal of Psychosomatic Research looked at the relationship between disturbed sleep and stress. Researchers concluded that social stress, as well as work-related stress factors, linked strongly to disturbed sleep and impaired awakening. So, what can you do to improve your stress and therefore improve your sleep?

If you have ruled out all of the above and still find yourself experiencing chronic sleep problems, then talk to your doctor. It may be time for a sleep study to rule out sleep apnea or any other underlying condition.