New research published in the journal BMC Medicine has correlated eating nuts three times per week to a lower risk of dying from cancer and heart disease, as well as a lower overall risk of mortality.

This study was the compound analysis of a long-term nutrition trial based in Spain, and surveyed over 7,000 people between the ages of 55 to 90. One group ate a Mediterranean diet rich in nuts or extra virgin olive oil, and the other group ate a low-fat diet which did not include nuts.

Those people that frequently included nuts in their diets were also found to generally have a lower body mass index, smaller waist measurements, higher levels of physical activity and lower rates of cigarette smoking. They were also found to have better diets in general, as eating nuts was linked to eating more vegetables, fruits and fish.

Prof Jordi Salas-Salvadó, the study’s leader from the Universitat Rovira i Virgili, says, “quite how nuts are able to prevent premature mortality is not entirely clear, nor why walnuts should be better for you than other nuts. Walnuts have a particularly high content of alpha-linoleic acid and phytochemicals, especially in their ‘skin’ both of which, along with fibre and minerals such as calcium, magnesium and potassium, may contribute to their healthy effect.”

Other studies have found similar effects regarding walnuts and reduced cancer risk, including one performed at the Marshall University School of Medicine. This study found that eating walnuts regularly may help prevent breast cancer, as well as to slow the growth of existing tumors in lab mice.

W. Elaine Hardman, Phd, the School’s associate professor of biochemistry, is confident that these findings may be applicable to humans. “Research suggests that walnuts can be a healthful part of the diet for the prevention not only of breast and other cancers, but also diabetes and cardiovascular disease,” she says.

For the experiment, lab mice were divided into two groups. One group was fed a diet that included what would be the human equivalent of two 1-ounce servings (“one serving fits in the palm of your hand,” Hardman explains) of walnuts each day. The other group was fed a walnut-free diet.

Results of the experiment showed that the mice who ate the walnut diet had less chance of developing breast cancer tumors. Hardman adds, “if the mice did get breast tumors, the growth rate was also slowed, by 50 percent.” She hypothesizes that the omega-3 fatty acids, antioxidants and phytosterols found in walnuts may be to thank for their effects. She also predicts that walnuts may have similar results with prostate tumors.

Along with reduced heart dis 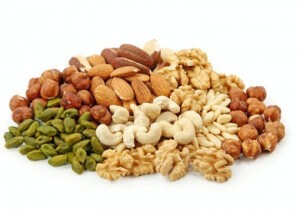 ease and cancer risk, nuts have a plethora of other excellent qualities. Regular consumption is associated with lower weight, lower blood pressure, less belly fat and less instances of metabolic syndrome. Be sure not to overdo it. Nuts are high in omega-6 fatty acids, which, while beneficial in moderate quantities, are linked to inflammation in excessive doses.

The body needs a balance of omega-3 and omega-6 fatty acids to function optimally; if omega-6 levels are significantly higher, inflammation may occur. Two ounces (approximate handfuls) per day is sufficient.

When choosing nuts, any kind – walnuts, pecans, almonds, brazil nuts, etc. – have been shown highly beneficial to overall health, as long as they are organic and raw. Nuts that are bought roasted have been through high-temperature processing, which produces acrylamides, known carcinogens, as well as other chemicals that do not promote health.

Almonds are another excellent choice, however, due to pasteurization laws, it difficult to find raw, unpasteurized almonds in the United States, although it is possible. Pasteurized almonds can still be legally labeled as raw, so be careful. Select a retailer that has a waiver from the pasteurization requirement. This may require a bit of digging, but it is worth it. Ask your local organic grocer for recommendations.