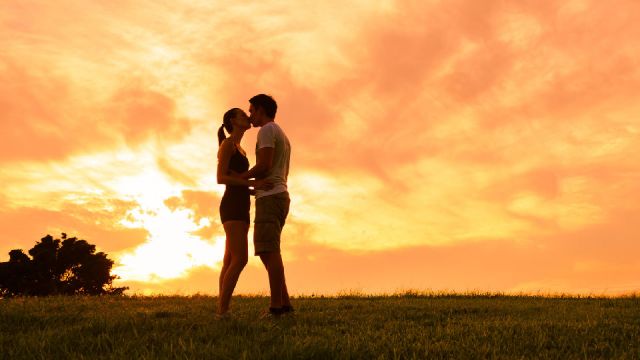 Kissing is one of the simplest forms of expressing affection and love to those around us. Depending on where you’re from, you might have actually kissed new people on the cheek in greeting. We want to kiss babies, our children, friends and of course our partners. When in a romantic embrace, your heart starts pounding, you feel the thrill of the moment and you even get butterflies in your stomach — if you’re into it, that is. Obviously, there are many pleasures in kissing, but researchers have found that there are also major health benefits to the activity. Here are eight of them:

Romantic kissing, even when it’s between people on a first date, can be beneficial to your immune system. According to a 2005 study in Neuroendocrinology Letters, lust — and the kissing that goes along with it — affects the body by reducing stress levels that help promote a healthy state. Another study, published in the journal Microbiome found that couples who kiss at least nine times per day share the same microbiota in their saliva. That means that together, partners can enjoy an improved immune system and less need for sick days.

Kissing releases feel-good neurotransmitters including the love hormone, oxytocin, and vasopressin, the hormone that bonds partners with one another, and mothers with their babies. Studies also show that dopamine, which affects the brain’s reward and pleasure centers, is released when we kiss our loved one.

According to Andréa Demirjian, author of Kissing: Everything You Ever Wanted to Know about One of Life’s Sweetest Pleasures, when we kiss someone passionately, our heart rate increases in a healthy way — much like during healthy exercise — and can help lower blood pressure. “It dilates your blood vessels — blood is flowing in a good, solid fashion and getting to all your vital organs.”

Kissing in partnered relationships can have a positive effect on stress levels. Citing Affection Exchange Theory, a 2009 study published in the Western Journal of Communication found that physical affection, including kissing, helps build resilience against stress. It also lowers cortisol levels in the body and may help reduce inflammation and illness as a side effect.

5. Kissing is good for your teeth

While this isn’t the sexiest benefit to kissing, the extra saliva in your mouth during a smooch session helps wash bacteria off your teeth. Although as Dr. Mathew Messina, a dentist and consumer advisor for the American Dental Association, says, “Still, I would not go around advocating kissing after meals instead of brushing.” But, for those of us in a great romantic relationship, it can’t hurt.

According to the previously mentioned study published in the Western Journal of Communication, kissing might also help reduce your cholesterol levels as it reduces levels of cortisol in the body. The two work together, with cholesterol promoting higher levels of cortisol. Since it’s also theorized that kissing can reduce your blood pressure, this conclusion makes sense.

7. Kissing can help you assess your compatibility with your partner

Not sure if you’re going to get along with the person across the table from you on your first date? Try smooching for a bit before the evening is over. Research suggests that kissing can help us determine the suitability of a potential mate. Interestingly, women placed greater importance on kissing for mate-assessment than men, but not to the point that it should be discounted as an important determining factor for compatibility in all genders.

A 2013 study in the Archives of Sexual Behavior found that the more you kiss in a relationship, the more satisfied you are with it. Surprisingly, it was the amount of kissing that improved relationship satisfaction for participants, not the frequency of sexual intercourse.

Not only is kissing beneficial to your health, but studies show being in a partnered relationship can help keep you healthy.

People in marriages tend to be less stressed than those who have never been married or have lost a spouse through death, divorce or separation. A 2017 study published in Psychoneuroendocrinology found that married couples have lower cortisol levels and thus less stress.

Another study found that people who become widowed or divorced in mid-life have three times the risk for Alzheimer’s disease, as opposed to those who are married through mid-life. In the Swedish study, professor Miia Kivipelto and her team interviewed 2,000 people an average age of 50 years old. Then, they interviewed the same participants 21 years later. They found that middle-aged people who are married have significantly lowered risk of dementia, with single middle-aged people living with twice the risk than their married counterparts.

Being in a partnered relationship might also help you live longer. Major studies in seven European countries found that married people not only enjoy greater mental and physical health, but they are also 15 percent less likely to experience premature death. John Gallacher, a Cardiff University professor who reviewed the studies, stated that there are more benefits to being married than just cohabiting with your partner, but the level of commitment between partners was the greatest predictor for a healthy, long life in a partnered relationship.

Whether you’re in a relationship or not, kissing can help keep you healthy and living with less stress, and that’s enough to make anyone want to pucker up more often.

Which of the above benefits of kissing surprised you the most? Let us know in the comments!